View basket “Madonna I’m Breathless Japan Promo cd only 100 made in title sleeve” has been added to your basket.
Sale!

The story goes that Shake Your Head (Let’s Go To Bed) Madonna lead vocal recorded with Don and David Was for the Was (Not Was) album “Born To Laugh At Tornadoes” produced in Detroit 1982-83. The released vocal used was by Ozzy Osbourne with backing vocals by Kathy Kosins and Carol Hall. Madonna and John “Jellybean” Benitez are both in the album credits.

During a May 2006 Kathy Kosins phone interview with Bruce Baron it was revealed that Ozzy recorded his vocal first. Kathy and Carol added vocals in Detroit. Kathy’s vocals were intended to be replaced by Madonna by producer Don Was.

Madonna’s label Sire Records did not agree to the release and Kathy’s vocal was restored for the ZE Records release as a backing track. Kathy then became a longtime Was (not Was) contributor. Madonna originally became involved via her firendship(sic) with Stephen Bray and his group Breakfast Club who were also signed with ZE Records (later acquired into MCA). Madonna requested that her original vocal not be used in an early 1990s remix released as a single in Europe to support a Was (Not Was) Greatest Hits album. Kim Basinger did the new vocals.

There the story was thought to have ended…………….

What i can now reveal EXCLUSIVELY is that for the Was (not was) ALTERNATIVE release SOMEWHERE IN AMERICA, STEVE SILK HURLEY was given the wrong basic vocal/acapella tracks for the remix
and you guessed it!! He was given the Madonnas vocal for the remix and the STEVE SILK HURLEY remix on THIS 12″ for auction has the MADONNA VOCAL on THIS VERSION ONLY. ITS ONLY on this 12″ that you will hear MADONNAs VOCAL TRACK for SHAKE YOUR HEAD.

This was PRESSED before the error was realised and the release subsequently withdrawn
The 12″ Single (this was to be an alternative 12″ remix, not the standard issue it was common practise(sic) at one point to issue many formats of a release). There was also a PROMOTIONAL CD SINGLE that came as an advance and was issued to RADIO STATIONS ONLY, this CD is ALSO INCLUDED in this very rare auction!

The ALTERNATIVE 12″ (the one for auction) has the catalogue number WASX12, compared to WAS12, the standard release which DID NOT contain the Madonna vocals

THIS 12″ (the one I am auctioning) has MADONNA Singing the vocals on an EXCLUSIVE REMIX BY STEVE SILK HURLEY – SEE THE SLEEVE FOR THE PROCLAMATION ITS EXCLUSIVE. 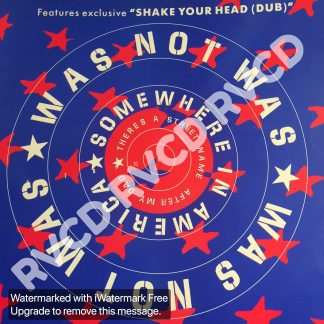 You're viewing: Madonna “shake your head” withdrawn 12” featuring her vocals £399.00
Add to basket